Aly turned 8 months old on Friday (and weighs a hefty 9.4kg). I cannot stop marveling at how much she has grown and how quickly time has passed. She’s at a really fun stage now with all the babbling and chuckling and it feels like a mini milestone is attained every other day. Everyday is a surprise and I’m cherishing every moment of it.

Feeds: One egg yolk for breakfast on weekdays. One meal of cooked porridge with fish/meat and some veg for lunch and few spoonfuls of brown rice cereal for dinner. She has tried spinach, potato, carrot, banana, papaya, apple, pumpkin, codfish, salmon, sweet potato, broccoli amongst other things.

Drinks about 130ml of milk about 11 in the morning and between 70ml to 100ml in the evening after her meal of brown rice cereal. I latch her on and nurse her to sleep about 9pm and pretty much throughout the night (yes nothing has changed) which is why I don’t give her milk early in the morning (come on, she has had free flow milk the entire night!).

Sleeping patterns: no updates. Still waking up a couple of times a night and not able to self-soothe to fall back to sleep. I’m still the giant pacifier. In fact I notice that she has been waking up earlier than usual this entire week! She used to only wake up when she hears us preparing to go to work in the mornings. These days she’s awake even before my alarm rings!

Speech: she definitely has no problems making herself heard. She loves babbling these days and lets out these squeals every now and then (especially in her Gymboree class). She has recently started “singing”, not singing along, but singing on her own, and looking quite pleased each time she does it because she has a fan club cheering her on and clapping with pride. Unfortunately, she sounds rather tone deaf at the moment but I hope that’s not permanent. Haha.

Motor skills: still not crawling and is obviously not motivated to crawl. She has been flipping the last couple of days though! I hope she keeps it up! When she is in a sitting position and we place a toy she likes in front of her, she will reach out for it and fall flat on her face (because she doesn’t know how to extend her arms to support herself). Guess she didn’t inherit her dad’s great psycho motor skills! Definitely prefers standing to sitting down and would pull herself up to the standing position whenever she can.

Other developments she’s got two teeth peeking out of her lower gums now! Her stubborn personality is starting to show. Let’s just say she definitely has a mind of her own and hates being told what to do and how to do it (sigh). She even hates being held by the hand to be guided to do or touch something and will promptly push our hands away when we try to do that.

She’s an observer and listens intently each time we speak to her. She is able to identify certain items like light, fan, tricycle, piano, photo (the graduation pictures that hang on our parents’ living room walls), ball. She also knows everyone in the immediate family. So whenever we ask “where is ____ ?” she will look in the general direction of that object/person. She also knows that she can find birds, airplanes and cars when standing at the window so she looks in the general direction of windows when asked “where is bird/airplane/car?”

She puts everything in her mouth, like every.single.thing she can land her hands on. She hates sitting on the stroller and can’t stay there for long. The manduca carrier thankfully still works fine. She’s needier than ever before and would burst into tears if she is left alone even for a split second. I’m really hoping this is only a phase! 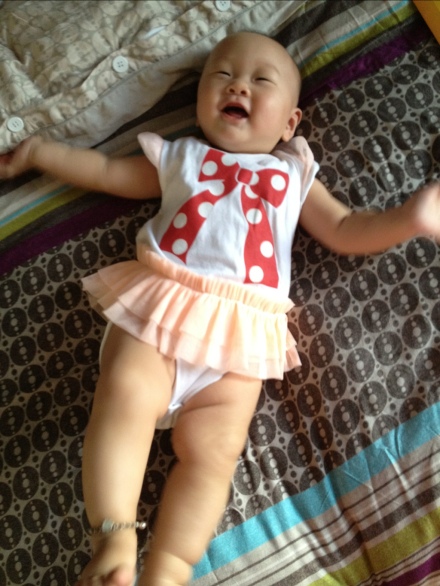 Welcome to my blog!

The musings of a full time working mother to a little girl. A coffee addict and a lover of dark chocolate, pretty cafes and afternoon naps. Photography is my new love. Through this blog, I share my thoughts on marriage and motherhood, and the joys of parenting. There are the occasional reviews of cafes and restaurants, stories from my travels and flaunts of my new buys.

What are you looking for?

What I blog about